Smoked Turkey Breast Ham:
Two quality brined turkey breasts are netted together into a roll and baked.
Great to slice as ready to eat - or glaze and heat gently
(Ranging from 3 to 4 kgs)   $35 pkg

​PLACE ORDER ENQUIRY NOW and Mara will contact you to finalise order details and payment. 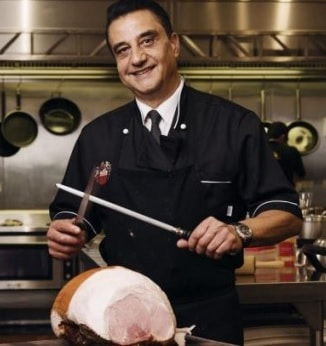 ​The seventh-generation butcher, who migrated from Italy when he was 16, has watched Australians' tastes mature over the decades. These days people are more likely to serve prosciutto and lamb for Christmas lunch, he says, although turkey and ham remain the most popular centrepieces. They are also curious about the provenance of their meat and inclined to opting for quality over quantity.
And when it comes to a Christmas ham, Pino is particular. He and his supplier, Bangalow Sweet Pork, steadfastly reject the modern shift toward leaner pork. "It's got to have fat on it," he says. "No fat, no flavour." Legs of ham at Pino's sell for between $160 and $275 depending on size.
The 60-year-old opened Dolce Vita Fine Foods 37 years ago, in the same spot on Kogarah's busy President Avenue, although it was much smaller back then. The meat market has become an institution beloved by locals, Sydney foodies and some of the country's best chefs.
Indeed, a few minutes after the Herald turns up unannounced, who should arrive but the "godfather of Australian cuisine", Tony Bilson. The man who set up the Berowra Waters Inn was stopping by to plan for his family Christmas lunch, where he's planning to serve salami, lobster and – of course – ham.
Bilson calls Pino "the best butcher in Sydney", but it wasn't always his destiny. As a teenager he wanted to join the air force, and at one point he grew tired and sold the butchery before buying it back nine months later. But a passion for quality meat keeps him, and his three children, in the game.
"The beauty of that is bringing to people something they love," Pino says. "When I see people and they're happy like that, that's beautiful."

BACK TO CHRISTMAS CATALOGUE PAGE